The story is the same among the ex-colleagues of Goldman Sachs, where Rishi Sunak launched his career in 2001. “I remember someone very chic, his smile with his white teeth, but who was very discreet and did not bind easily”, adds an investment banker present in the London branch of the bank in the early 2000s.

“Rishi who?” as the British press likes to paint, Sunak has been, since October 25, at the head of a country still in the throes of Brexit. Beaten in early September by the very right-wing Liz Truss, during the vote of the conservative activists, the “looser” returned through the window six weeks later, thanks to the mistakes of “Calamity Truss”.

On October 24, 2022, when he was elected leader of the Conservative Party. (T. Salci/Zuma/Rea)

Having become the youngest Prime Minister in the history of the United Kingdom at 42, this perfect representative of the British Indian elite inherited an explosive charge as the country entered into recession. On January 4, he came out of his discretion by delivering a remarkable speech, aimed at reassuring Britons depressed by galloping inflation, repeated strikes and overwhelmed hospitals.

“We can reverse the slow acceptance of decline, reject pessimism and fatalism, refuse the limits of our aspirations,” he said. “His mission is one of the toughest, observes Alastair Campbell, Tony Blair’s ex-spin doctor. But Sunak has at least one advantage in his game, he is more rational than Boris Johnson or Liz Truss were.”

Flask-back. Born in Southampton to Indian parents, a doctor father from Kenya and a pharmacist mother born in Tanzania, Rishi Sunak achieved an exemplary education which led him to Oxford, the breeding ground for the kingdom’s elite. Passionate about finance more than politics, the eldest of three siblings tries his hand at stock market moves and spends his free time at the investment club of the venerable British university.

He then joined Goldman Sachs and left for California where, after his MBA at Stanford, he co-founded the hedge fund Theleme Partners with Frenchman Patrick Degorce. Discreet but endowed with a “swift brain”, as the aforementioned investment banker points out, Rishi Sunak also mixes work and family. Four years after his marriage to Akshata Murthy, daughter of the Indian billionaire Narayana Murthy, founder of Infosys, a computer giant, he was chosen to watch over his father-in-law’s fortune. 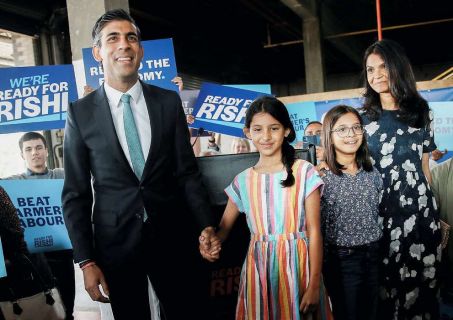 In July 2022 with his family. After his marriage to Akshata Murthy, the daughter of the founder of the computer giant Infosys, he is chosen to manage the fortune of the Indian billionaire. (P.Nicholls/Reuters)

With assets of 835 million euros, according to the Sunday Times, double that of King Charles III, the new Prime Minister does not look like a gambler. As rare external signs of wealth, we note his Henry Herbert suits at 4,000 euros, his Prada moccasins or his Georgian mansion, with private island, acquired for 1.7 million euros in Yorkshire.

It is in this region hit by deindustrialization that the former ace of finance became a deputy, in 2015, in the conservative stronghold of Richmond. The chosen one, a practicing Hindu who says he is “proud of his origins”, earns the nickname “Maharaja of the Yorkshire Dales”. Widely re-elected two years later, he even took the oath on the Bhagavad-Gita, one of the most famous texts in Hindu literature, a first in British history.

His rise was meteoric: he joined Theresa May’s second government in 2017 as Under-Secretary of State for Housing, then was appointed Chief Secretary of the Treasury by Boris Johnson in 2019. His excellent relations with BoJo even propelled him to the Chancellery of the Exchequer (Ministry of Finance) a year later after the resignation of Sajid Javid. 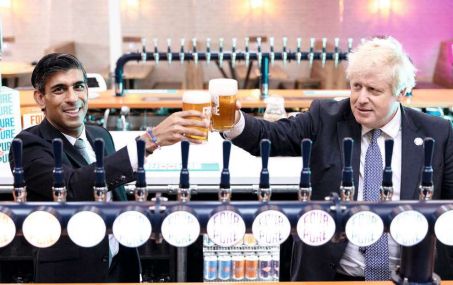 In October 2021, with Boris Johnson, in London. Chief Secretary of the Treasury in 2019, he was propelled to the Chancellery of the Exchequer a year later thanks to BoJo. (D. Kitwood/AFP)

By accepting Johnson’s offer, Rishi Sunak gains a reputation as a long-toothed young wolf. Indeed, this five-star promotion has a bitter taste since the just forty-year-old is forced to leave the supervision of the Budget to Dominic Cummings, the omnipotent adviser to the Prime Minister. “This episode showed that Sunak, who was a virtual stranger, had a lot of ambition, notes former diplomat Peter Ricketts, member of the House of Lords. He was ready to make major concessions to obtain this post.

Ambitious, the new head of government certainly is. This video game lover has shown that he knows how to be pragmatic. Liberal, supporter of budgetary orthodoxy, he nevertheless implemented as Minister of Finance the “whatever the cost” British. “Rishi Sunak is known for his role in the response to Covid-19 with very expensive business loan programs, underlines Jill Rutter, a former senior civil servant now a researcher at the Institute for Government.

He is pragmatic, but it would be wrong to say that he has no ideology. He seems to have been very influenced by his stay in California and advocates an innovative economy.” Incarnation of the Commonwealth and fierce defender of Global Britain dear to Boris Johnson, Sunak is also an early Brexiter. “Brexit is a choice that does not happens only once in a generation, he argues. When I see what is happening in Silicon Valley or in India, the speed at which things are changing, I tell myself that we need to have the flexibility and dexterity to adapt.”

When choosing his ministers, Rishi Sunak also showed a more opportunistic facet. While she had just been sacked for having sent official documents from a personal email address, Suella Braverman was thus reinstated as Minister of the Interior by the new leader. Coming from the radical fringe of the Tories, this former lawyer of Indian origin has distinguished herself in recent months by her slippages, in particular her vitriolic remarks on migrants or wokism. “This appointment is purely political, argues Peter Ricketts. After choosing Truss this summer, Braverman gave his support to Sunak in October, which reassured the right of the party. The Prime Minister is indebted to him.” An addiction that weakens him. 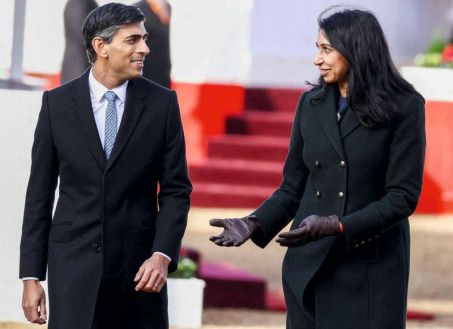 In November 2022, with Interior Minister Suella Braverman. Joined Rishi Sunak later, the ex-lawyer, from the radical fringe of the Tories, was reinstated in her post after being sacked. (H.Nicholls/Reuters)

This political weakness is reinforced by the retention of Jeremy Hunt as Chancellery of the Exchequer. Appointed under Truss, the latter became the darling of the financial markets and it was he, not Rishi Sunak, who successfully delivered a much-anticipated Revised Budget on November 17. “The Prime Minister appears quite weak, abounds François-Joseph Schichan, former chief political adviser at the French embassy in London.

It has no popular mandate and Hunt dominates it. It is not at all certain that Rishi Sunak will still be in Downing Street at the time of the general election in 2024.” To achieve this, the ex-banker close to William Hague, a respected Conservative figure who was Secretary of State for the Foreign Affairs under David Cameron, knows that he will have to survey a ridge line and prove his political sense.

Many observers see his moderation as one of the keys to his eventual success. She revealed herself on the very sensitive Northern Ireland Protocol Bill, this bill unraveling crucial parts of the Brexit treaty, which Brussels considers a violation of the United Kingdom’s international commitments.

“When he was Chancellor of the Exchequer, he expressed reservations, wishing to avoid a deterioration of commercial relations with the European Union, specifies Jill Rutter. We will see if he has the authority – and the desire – to face the hardliners of his party, supporters of the project.” The recent publication in the Sunday Times of an article on the will of the executive to see the United Kingdom establish the same relations with the Union as the latter has with Switzerland is, however, an indication of the desire for dialogue of the successor of Liz Truss. 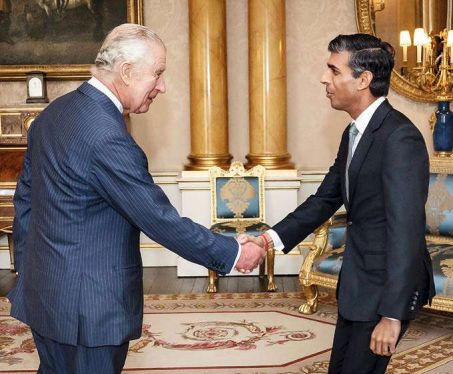 On October 25, 2022, with Charles III, during their first meeting at Buckingham Palace. The fortune of the new Prime Minister, estimated at 835 million euros by the Sunday Times, is twice that of the King. (A. Chown/AFP)

Contrary to his predecessor, who had not been able to say in the middle of the electoral campaign whether Emmanuel Macron was a “friend” or an “enemy” of his country, Rishi Sunak has undertaken to reconnect with Paris. A rapprochement symbolized by an agreement aimed at limiting illegal crossings of the Channel. Conversely, the British leader raised his voice vis-à-vis Beijing. Cautious in recent months, he did not hesitate to declare at the end of November, after the arrest in Shanghai of a BBC journalist, that with China “the famous “golden age” [en référence au réchauffement des relations sino-britanniques sous David Cameron] is over.” During this first major polysystemic speech” posed by China.

“He surprised me, says a former French ambassador in London. I expected something agreed, but it was clear and flawless, as if he knew exactly where he wanted to go.” Towards New Delhi, for example, where Prime Minister Narendra Modi on October 24 hailed the “living bridge” represented by the British of Indian origin? Even if he still advances masked on many subjects, Rishi Sunak begins, little by little, to discover himself.

what they say about him

William Hague, former leader of the Conservative Party and ex-Secretary of State for Foreign Affairs: “Rishi Sunak has what it takes to succeed at No 10 [Downing Street]. His reputation shows he’s an effective leader who can win hearts and get the job done.”

Home Secretary Suella Braverman: ‘We need a Prime Minister [comme Rishi Sunak] who can get the support of the whole big Conservative family. Someone who can work meaningfully with other people.”

Alastair Campbell, Tony Blair’s former spin doctor: “Rishi Sunak is better than Boris Johnson and than Liz Truss. But better than Theresa May or David Cameron? I don’t think so.”

Peter Ricketts, ex-ambassador of the United Kingdom in France: “On the economy, his DNA is that of the tories. For the rest, we don’t really know his convictions, especially in foreign policy.”

Keir Starmer, Labor leader: “Even his own camp knows he’s not on the side of the workers. That’s why he was beaten by Liz Truss, in the only election he won present.” (Hartley/Sipa)